Santos midfielder Alan has revealed that there is an offer on the table from Spanish giants Real Madrid. 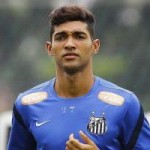 It is said that Real want to sign the 22 year old defensive midfielder initially for their Castilla squad this season.

Alan told Globo Esporte : “I received the offer before the game against Barcelona, they watched me in three games in a row when I played as a starter against Portuguesa, Coritiba and Crac,”.

“I am very happy, I am a reserve player and Real Madrid are interested in me.