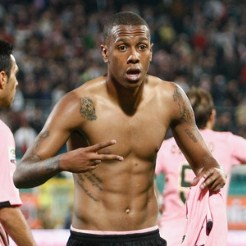 Palermo striker Abel Hernandez is in the sights of Chelsea and Real Madrid.

Hernandez has scored twice in seven league appearances so far this season and Palermo are mindful of growing interest in the 21-year-old.

As a result, the club have moved to ward off interest from Chelsea and Madrid by valuing Hernandez at around £15m.

Arsenal and Tottenham made enquiries after the young Uruguayan at the end of last season.