Reports are out claiming that Real Madrid are interested in Manchester United goalkeeper David de Gea. 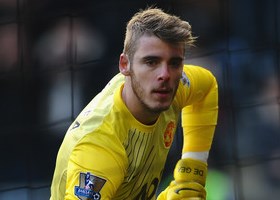 It is said that Real coach Carlo Ancelotti remains unhappy with his present keeper options, as both Iker Casillas and Diego Lopez have failed to completely win him over this season.

El Mundo Deportivo claims that the Spanish giants are prepared to test United’s resolve for De Gea, who only penned new terms earlier this season.

Real believe they can tempt De Gea away with Champions League football and also sense that United would be willing to sell to boost their own transfer kitty for rebuilding plans.