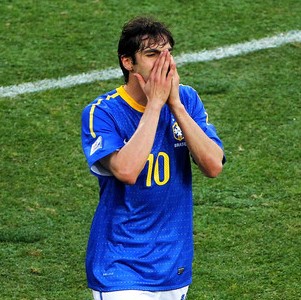 The Spanish giants announced on their website this morning that: “It is suspected that there may be an injury to the meniscus, which could require arthroscopic surgery,”.

“Kaka has travelled to Belgium accompanied by club doctor Carlos Diez and will be examined by a specialist in Antwerp.”

The Brazil international struggled all last season with injury after moving to Madrid from AC Milan, and could be set to miss around two months this term following his latest setback.

Nevertheless, coach Jose Mourinho insists the club will be able to cope without the 28-year-old.

“If we have to lose him for a while, it won’t be a drama – we have other players,” he said.

“But we want him to be at 100% so he is happy. He is a player who is much loved by his team-mates – he is one of the best players in the world.”