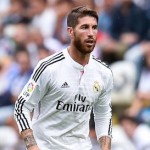 Reports are out claiming that Premier League clubs are monitoring Sergio Ramos’ situation at Real Madrid.

The Daily Star Sunday says sources close to the Spain star insist Arsenal, Manchester United and Manchester City have been contacted about a summer move for the defender.

Ramos, 28 is in the middle of contract talks with Real and they are not going well. He wants a pay rise even though his current deal does not expire until 2017.

But the right-back has yet to agree terms and both City and United have been told he would consider a transfer – though a deal would cost over £40million.

Ramos has a frosty relationship with Real president Florentino Perez and his representatives have been testing the market.