It has been reported that Real Madrid are reviving interest in Bayern Munich striker Robert Lewandowski. 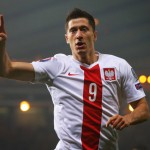 Marca reported that while the name of Álvaro Morata is being mentioned almost every day, the other object of the club’s desire is none other than Lewandowski, according to the player’s own agent.

“You cannot deny that there is interest from Real Madrid,” he says when asked about Lewandowski’s future.

According to the player himself, this interest has not been reflected in any more approaches, but there has been very close analysis of all of the games he has played.

“There has been no contact over the past few months,” he said, though he admits that he is still learning Spanish.

Arsenal are also said to be keeping tabs on the Poland international star.