It has been revealed that Real Madrid are determined to sign Manchester United goalkeeper David de Gea this summer. 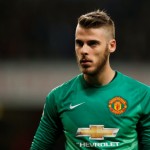 Madrid newspapers Marca and AS both declare this morning that Real will do whatever it takes to bring De Gea back to Madrid.

It’s suggested a €5 million signing-on fee has been agreed between the two parties should De Gea end up staying with United this season.

Even if nothing can be settled this summer, Real have assured De Gea they will wait for him – with his United contract now having less than 12 months to run.

The major obstacle to a deal this transfer window is United manager Louis van Gaal, who refuses to allow De Gea to leave unless Real include Sergio Ramos in the operation.