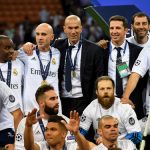 It has been revealed that Real Madrid will earn a cool €12 million from their overseas tour.

Marca claims that this time last year, after a whistle-stop tour in Australia and China, which raised some criticism from Zinedine Zidane, the club pocketed 20 million euros.

Not as much but this is mainly because China and Australia pay larger amounts and there is also a friendly less than last year.