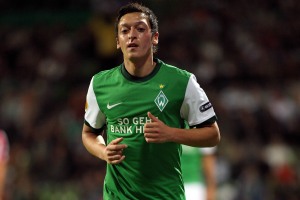 The 21 year-old attacking midfielder, who can also play as left wing is fast-emerging as the hottest property in the German transfer market.

Real Madrid are keeping tabs on Ozil and is believed to be willing to include Rafael van der Vaart in an offer for the young Germany international.

The talented midfielder has so far played 52 matches for Werder Bremen and scored 10 along the way. He has also been capped 7 times by the German national team.

He made his debut for the Germany national football team during a friendly match against Norway on 11 February 2009. He scored his first goal for the senior team in his third appearance, another friendly, against South Africa on 5 September in Leverkusen.

Carvalho : Kaka Is Returning To His Best!

I’m Not Obsessed With The Ballon d’Or! – Cristiano Ronaldo