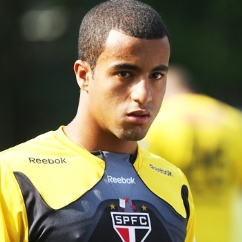 United and Real Madrid are locked in battle to sign Brazilian wonderkid Lucas – the 19-year-old sensation who has already been capped 11 times by his country.

United are pulling out all the stops to entice the Sao Paulo attacking midfielder to Old Trafford and fends off the interests from the Spaniards.

They plan to invite Lucas’ dad to the North West of England for talks and hope they can lure him to the Barclays Premier League for next season.

The English champions will have to shell out a figure in the region of £12million for the midfielder, according to reports in The Mirror.