It has been reported that Iker Casillas is considering a potential summer move away from Real Madrid. 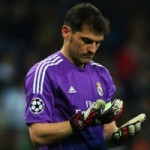 El Mundo Deportivo reported that the 33-year old Spanish international goalkeeper is unhappy about being left out of Carlo Ancelotti’s La Liga first team last season and may look to leave the Santiago Bernabeu this off-season.

Casillas, who played in Real’s Champions League triumph over Atletico Madrid, is a target for Arsenal and could be lured to north London according to the report.

However, it will likely take a decent offer to pry him away from the club he joined as a schoolboy and went on to captain.