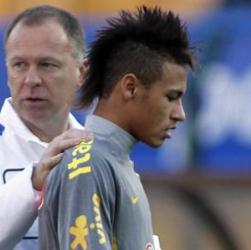 It has been revealed that Real Madrid are inviting Santos star Neymar to Spain for talks.

RAC1 revealed that Real vice-president Jose Angel Sanchez is inviting the Brazilian sensation, agent Wagner Ribeiro and his father to Madrid to discuss a move to the Spanish giants.

While Barcelona are also keen, it’s been revealed that the 19 year old rejected an offer from their president Sandro Rosell to attend the Champions League final at Wembley as a guest.

“The boy’s heart is white,” said one source.

Chelsea owner Roman Abramovich is also pushing to sign Neymar, though Sanchez believes Real can quickly wrap up a deal for the winger.