It has been reported that Real Madrid have included four of Zinedine Zidane’s Castilla team in their Champions League squad. 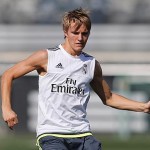 Abner, Martin Ødegaard, Marcos Llorente and Borja Mayoral have been included in the list submitted to UEFA for this year’s Champions League.

Abner and Ødegaard feature in the A list while Llorente and Mayoral are in the B list.

This list can be modified 24 hours in advance of each Matchday.

Cristiano Ronaldo : We Must Not Underestimate Tottenham!