Reports are out claiming that Real Madrid have opened talks with Manchester United for young fullback Guillermo Varela. 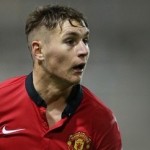 The Daily Mail claims that the 21-year-old was David Moyes’s first official signing from Penarol for £1.75m but Madrid want him to join up with Zinedine Zidane and their B team Castilla.

It is said that Real have asked for a loan for the right-back which could then become a permanent £4m deal.

Varela is capped at youth level for Uruguay, having played for both their Under 17 side and also the Under 20 side.

The former Penarol man has failed to make a single appearance for Manchester United’s first team but has been used regularly for the club’s Under 21 team.

Arsene Wenger Insists David Moyes Must Be Given More Time Man Utd Will Be My Last Job For Sure! – Louis van Gaal