Reports are out claiming that Real Madrid are interested in Manchester United striker Danny Welbeck. 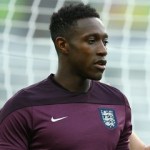 The Daily Star revealed that Spanish media sources are reporting the Spanish giants are interested in bringing the 23-year-old to the Bernabeu as a replacement for Alvaro Morata.

Morata is on the brink of transferring to Juventus which leaves Madrid looking a striker light if Karim Benzema gets injured.

Welbeck, 23, scored nine goals in 25 Premier League appearances last term in what was a disappointing campaign for the Red Devils.