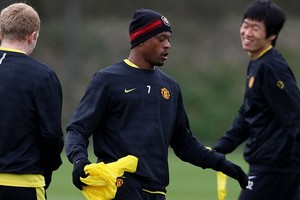 Interesting news are out and it has been reported that Patrice Evra is considering his future at Manchester United.

Local newspapers have reported that French international Evra is ready to quit Manchester United this summer – with Real Madrid and Inter Milan ready to pay £18million.

The left-back, now age 28, is believed to want a new challenge.

It is also believed that Evra’s close ex-United pal Cristiano Ronaldo has recommended him to Real.