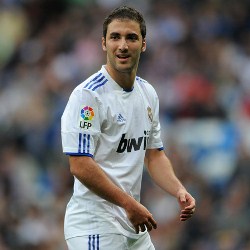 Real Madrid is reportedly inviting offers for striker Gonzalo Higuain and it is said that Premier League clubs are ready to pounce.

The Daily Mail has reported that Premier League giants Arsenal, Tottenham and Manchester City have been alerted to the news that Real Madrid may be willing to sell the Argentine international striker for just £15m.

The former River Plate star scored 13 goals in 25 appearances last season despite four months out with a back injury.

The 23 year old is expected to make way should Real Madrid succeed in their pursuit of Atletico Madrid striker Sergio Aguero.