It has been reported that Real Madrid are confident of securing Sami Khedira to a new agreement. 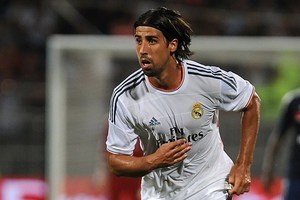 Despite recovering from knee surgery, the German international midfielder was again linked with Manchester United and Arsenal this week.

However, El Confidencial claims that the Spanish giants have the outline of a new deal already agreed with Khedira’s camp and all that remains is for the player to return from Germany to put pen to paper.