The New York Cosmos announced today that former Spanish national team captain Raúl González Blanco has signed a multi-year contract to join the club for the 2015 North American Soccer League campaign, pending a physical. As per club policy, terms of the deal were not disclosed. 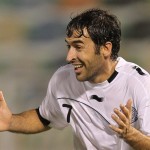 Raúl will also take on an additional role as technical advisor for the New York Cosmos Youth Academy, which is slated to open in 2015. Upon his retirement from playing, Raúl will assume a full-time role overseeing the academy.

“Everyone throughout the soccer world knows the Cosmos name and the legacy of the players that played for this team previously,” Raúl said. “They helped establish soccer in America and I’m honored to follow in their footsteps. I believe in this club’s vision and I’m excited to be a part of that.”

Raúl built a legendary career at the famed Spanish club Real Madrid – beginning his professional career with the team in 1994 and remaining with Los Blancos for 16 years, leading the club to six La Liga titles, four Spanish Super Cups, and three UEFA Champions League titles. He left Real Madrid in 2010 as the team’s all-time leading goal scorer and moved to German club FC Schalke 04. At Schalke, Raúl scored 40 goals in 98 total matches, leading the Bundesliga outfit to the Champions League semifinal in 2011, before departing for Al-Sadd Sports Club in 2012.

“We’re obviously thrilled to add a player of his quality to the team,” Cosmos head coach Giovanni Savarese said. “Raúl’s skill and ability is world renowned. He’s a world-class player and he adds a whole new dimension to our attack.

“He also brings immense passion and knowledge that he can share with our team and with the next generation of Cosmos players in our youth academy. He’ll help set the academy training curriculum, structure and establish our player development pyramid.”