It has been reported that Real Madrid are chasing Chelsea winger Eden Hazard. 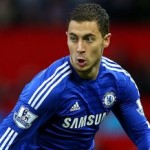 The Daily Express reported that the Spanish giants are to step up their interest in Chelsea star Hazard as they prepare for life without Gareth Bale. Cristiano Ronaldo : Wayne Rooney Will Be Back To His Best!

Fernando Llorente Happy To Be Linked With Real Madrid And Barcelona