It has been reported that Real Madrid are no longer interested in signing Granada fullback Guilherme Siqueira. 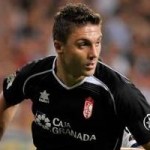 The 27 year old Brazilian was linked with the Spanish giants as a replacement for Fabio Coentrao.

However, Cadena Cope says they have decided to drop their pursuit to focus all energies on signing Tottenham star Gareth Bale.

Siqueira is also interesting Everton, where he is under consideration as a replacement for Manchester United target Leighton Baines.