It has been revealed that Tottenham have attempted to send Emmanuel Adebayor again to Real Madrid. 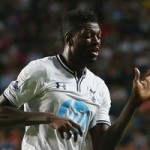 The Daily Mail claims that Tottenham chairman Daniel Levy has failed in an attempt to offload Adebayor as part of the negotiations with Real Madrid for the sale of Gareth Bale.

The Togo international striker was offered during the complicated negotiations between Levy and Real Madrid president Florentino Perez.

Spurs want Adebayor out of the club and he was thrown into a deal that will eventually set a world record fee for Bale.

The former Manchester City striker had a spell on loan at the Bernabeu in 2011, but new coach Carlo Ancelotti doesn’t want him next season.