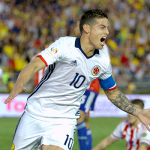 It has been revealed that Real Madrid are digging in over the future of James Rodriguez.

AS says Real Madrid are maintaining their stance that playmaker James is not for sale.

Manchester United, Manchester City, Chelsea, Bayern Munich and Paris Saint-Germain have all shown their interest in James, but they have all been told that James is not available for transfer.

Senior Bernabeu figures want to keep hold of the midfielder and they are ignoring all offers, even though PSG would be willing to fork out around €90m to bring him to the French capital.