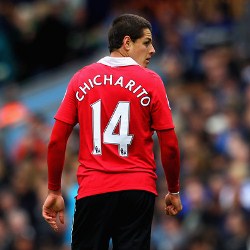 Sensational news are out and it has been revealed that Spanish giants Real Madrid have offered players to Manchester United in a bid to convince them to part with Javier Hernandez.

The Daily Mail has reported that Jose Mourinho is interested in signing the Mexican international and it is said that he has personally told his friend and rival manager Sir Alex Ferguson to name his price.

However, such has been the 23-year-old Mexican’s impact at Old Trafford in his debut season that Ferguson has instructed his board to dismiss any offer from a club that has developed a habit over the last decade of coveting United’s best players.

With Hernandez scoring 20 times during a campaign that ended with a starting berth in the Champions League Final against Barcelona at Wembley, it is no surprise that Europe’s biggest clubs are looking at a player who signed for United on relatively modest £40,000-a-week terms last summer.

It is understood that Mourinho told Ferguson he could have the likes of French forward Karim Benzema – a player the United boss has bid for in the past – or Argentinean striker Gonzalo Higuain in part-exchange for Hernandez.

Ferguson knocked the offers back flat, though, and it is likely now that United will attempt to offer Hernandez a pay hike reflective of his increased standing in the game, even though the Mexican is only a year in to his contract at Old Trafford.

Sami Khedira : Ozil Will Do All He Can To Be The World’s Best