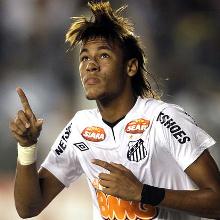 Real Madrid are willing to make Neymar the equal highest paid player at the club.

Desperate to beat Barcelona for the Santos star, AS says Real have offered Neymar a stunning six-year deal worth €10 million-a-year – not a euro less than Cristiano Ronaldo’s current deal.

Real, however, are insisting on the club policy of a 50:50 split in image rights.

Neymar has a stable of lucrative deals with the likes of Nike, Red Bull, Panasonic, Banco Santander or Volkswagen, many of which run to 2015.

It’s understood these agreements include increases should Neymar move to Europe, so offsetting any money he’d lose by dropping the percentage he shares with Santos – which is between 70-100 per cent.

Real Madrid would be happy to meet Neymar’s €70 million buyout clause, but will insist the deal be struck this summer.

How Ronaldo will take seeing a European rookie being paid his same wages is anyone’s guess.