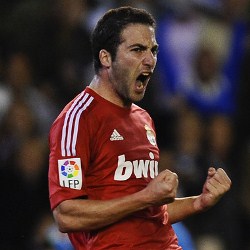 Real Madrid are ready to make a cash plus player offer to Manchester City for striker Sergio Aguero.

AS reported that the Spanish giants are prepared to offer Gonzalo Higuain plus a cash component of between €5-10 million to convince City to part with El Kun.

Aguero has known since the New Year that Real would try to bring him back to Spain and is enthusiastic about the idea – even father-in-law Diego Maradona has urged him to accept the move should Madrid make good on proposal.

It could leave City in a dilemma, however. The Blues have enjoyed a good relationship with Atletico, where club directors have made it clear they would consider selling their former star to Real as an act of ‘hostility’ – particularly after just 12 months away from the Spanish capital. Man Utd Convinced Sergio Ramos Has Taken Them For A Ride