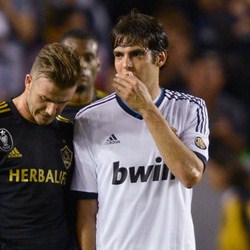 Sensational news are out and it has been revealed that Real Madrid star Kaka has been offered to Manchester United.

The Daily Mail reported that Galatasaray and Kaka’s former club AC Milan have also registered their interest in the 2007 World Player of the Year, but United are the biggest draw for the Brazilian.

Sir Alex Ferguson is giving the 30-year-old serious consideration but has fears about his form and fitness after so many injuries.

The Brazilian’s salary is close to the £250,000 a week earned by Van Persie and Wayne Rooney and, although Real are reluctant to let Kaka join a Champions League rival, his wages are a burden considering he will spend most of the season on the bench at the Bernabeu.