It has been reported that Real Madrid have opened talks with Wolfsburg for midfielder Luiz Gustavo. 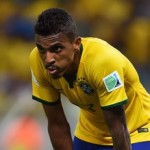 BILD claims that negotiations have kicked off between the two clubs over a fee for the Brazil midfielder, with Wolfsburg seeking €25-30 million to sell.

It is said that Real coach Carlo Ancelotti is eager to sign a new ball-winner for his midfield over concerns that Sami Khedira will move on this summer.

Gustavo is aware of Real’s interest, but as yet his camp are still to field direct contact from the European champs.