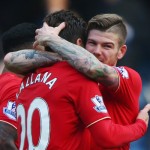 Reports are out claiming that Real Madrid are planning a January raid on Liverpool for Alberto Moreno.

Marca reported that Real are on the hunt for a new full-back after Marcelo was struck down with injury.

Real had previously looked into a deal for Moreno prior to his switch to Anfield from Seville last summer.

And according the report, the 10-time European Champions could renew their interest as Rafa Benitez hunts for a new full-back.