Reports are out claiming that Real Madrid are preparing a bid for Chelsea star Eden Hazard. 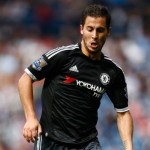 The Sunday Times reported that Florentino Perez, the Real Madrid president, is intent on delivering a new Galactico signing and regards Hazard as an ideal fit.

Perez has twice sanctioned world-record transfer fees in bringing Cristiano Ronaldo and Gareth Bale from England to La Liga and will not baulk at spending heavily to secure Hazard.