It has been reported that Real Madrid intend to make a massive bid for Liverpool striker Luis Suarez this summer. 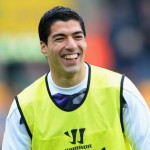 The London Evening Standard claims that the European champions want to make the Uruguay international their next ‘Galactico’ and will make a £70million bid to sign the Liverpool striker this summer.

Suarez signed a new four-and-a half year deal worth £200,000 a week in December, although it was reported it included a £70m release clause.

Liverpool are determined to keep hold of their prize asset as they compete for the Premier League and Champions League next term.