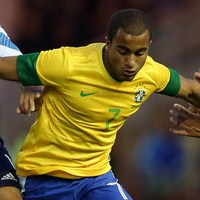 Reports are out claiming that Real Madrid are making a fresh move for Sao Paulo star Lucas Moura.

The Brazilian international midfielder is the subject of intense interest from Manchester United, where manager Sir Alex Ferguson has openly declared they’re attempting to settle on a fee with Sao Paulo for the youngster.

However, El Confidencial says Real are returning to the negotiating table this week for Lucas.