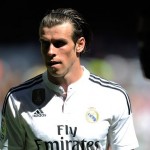 It has been reported that Real Madrid are prepared to sell Gareth Bale this summer.

The Mail on Sunday says Bale will be the subject of a three-way £75million transfer battle between Chelsea, Manchester United and Manchester City this summer.

Bale has indicated, publicly at least, that he wants to stay at Real.

But sources in Spain suggest that the club could be willing to offload him even though manager Carlo Ancelotti has said he wants the winger to remain at the club.