Reports are out claiming that Real Madrid president Florentino Perez is willing to listen to offers for Cristiano Ronaldo. 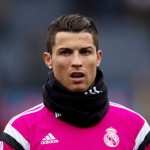 The Portuguese international only won the Ballon d’Or last month and is Europe’s top goalscorer, but Perez is prepared to cash in this summer, says El Confidencial.

It’s suggested Ronaldo can leave the Santiago Bernabeu if Perez is offered a huge transfer fee for the Ballon d’Or winner.

Manchester United have seriously explored the prospect of bringing back their favourite son over the past 12 months, while PSG are confirmed admirers.

Manchester City and Chelsea would also be suitors if Perez carries out his plan to sell the Portuguese, now 30.