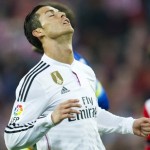 Reports are out claiming that Real Madrid president Florentino Perez is ready to SELL Cristiano Ronaldo this summer.

The Portuguese international has struggled to find his best form since the New Year and was part of Real’s team beaten at Athletic Bilbao yesterday.

Sport says Perez reckons the Portugal skipper has passed his peak and is concerned that Ronaldo’s knee injury will do him further harm in the future.

The news is likely to put ex-club Manchester United on alert with a view to a possible transfer back to Old Trafford.

Ronaldo’s agent Jorge Mendes recently admitted that Ronaldo loves United fans, but ruled out a move back to The Red Devils.

Mendes told the BBC: “He loves the Man United supporters, he told me because he was there for six years.

“Cristiano Ronaldo is the best player ever in the world and the best sportsman ever.

“So you can’t compare Cristiano Ronaldo with anyone else. It’s impossible to find someone like him.” Who Will Win The Barclay’s Premier League? – Poll