Reports are out claiming that Real Madrid are plotting a summer bid for Manchester City striker Sergio Aguero. 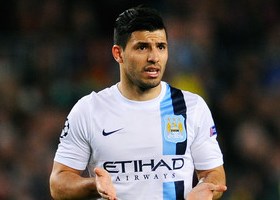 The Mirror reported that the Spanish giants are ready to sell Karim Benzema to Paris Saint-Germain, and reports in Madrid suggest they will let him go for £35million.

That will help fund a huge move to try to tempt the Blues to sell their 25-year-old Argentinian forward, who spent five years in the Spanish capital with Atletico before his £38m move to Manchester in summer 2011.

Real ‘s president Florentino Perez is personally involved in trying to broker a deal with the PSG hierarchy and will then go for Aguero.

City have made it clear they will not sell their star players and Aguero is crucial to their future plans – a fact highlighted by his injury absence coinciding with their title challenge falling apart.