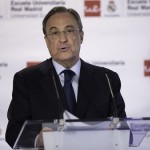 It was reported De Gea would be due €10 million if Real failed to sign the Spaniard over the summer.

“Every day I’ve had to hear that we had to pay 10 million euros for not signing De Gea and that’s a lie,” said the Real Madrid president.

“They are the same ones who have been saying since I arrived that I would turn Real Madrid into a public limited company. 15 years later they are still saying it and they accuse me of corrupting assemblies.”

Danny Welbeck Determined To Fight For His Place At Manchester United

Mourinho : No Galaticos Era Under Me!