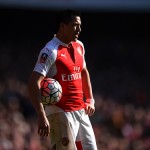 Reports are out claiming that Alexis Sanchez is facing crunch time at Arsenal.

The Chile international attacker is coming to the end of his second season with the Gunners.

Arsenal boss Arsene Wenger has stated he intends to offer Alexis a new deal this summer.

However, El Mundo Deportivo says PSG president Nasser Al-Khelaifi wants to tempt him to France as a big-name replacement for Zlatan Ibrahimovic.

But they’re not alone, with Real Madrid and Chelsea not just watching developments, but actually making contact recently with Alexis’ agents. Arsenal Yet To Field Serious Offers For Robin van Persie