Reports are out claiming that PSG and Real Madrid have struck an agreement over the transfer of Angel di Maria. 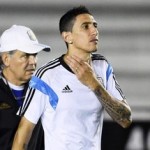 Sport reported that a deal has been brokered which will allow PSG to duck UEFA’s Financial Fair Play laws and add Di Maria to their squad for the new season.

PSG president Nasser Al Khelaifi will pay €10 million immediately to Real for the Argentine, before coughing up the remaining €60 million next summer.

Super agent Jorge Mendes, who takes care of Di Maria’s affairs, has been in the US where Real are touring and went into talks with president Florentino Perez upon his arrival late, last week.

Mendes has also worked as a go-between for the two clubs and negotiations are understood to have been smooth. So much so, that an announcement could be made even today.