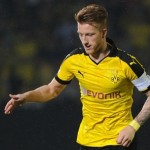 Onda Cero reported that Real chiefs are willing to work the remaining weeks of the summer market to bring Reus to Spain.

The Germany midfielder penned new terms with BVB earlier this year, however, he has been the subject of intense transfer speculation in the last week.

Arsenal were linked with a €70 million bid for Reus, while Liverpool have also been mentioned as a destination in the German press.

It’s now broke that Real want to tempt Reus to Madrid, where club chiefs are prepared to work to the final days of the market to strike terms with BVB.

Transfer Mega Spending Sure To Continue – Arsenal’s Per Mertesacker