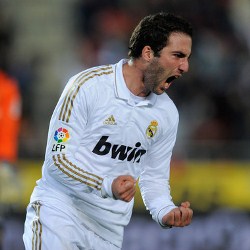 The Daily Mail says the Spanish giants will make an offer for the Dutch international in the summer as they join the £30million race for the Arsenal striker.

It is also said that Manchester City and Barcelona are keen on the Dutchman, 28, who has 16 months left on his Arsenal contract and is yet to commit to another deal.

Madrid will also look to put Argentina striker Gonzalo Higuain in as part of the deal. Higuain, 24, is a target for Chelsea but has been long admired by Arsenal boss Arsene Wenger.