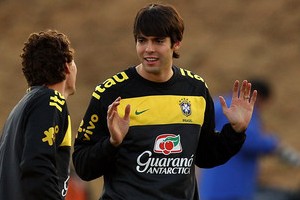 Interesting news are out and it has been reported that Spanish giants Real Madrid has made it known that they will consider offers for midfielder Kaka.

According to Sport, Real Madrid coach Jose Mourinho regards Rafael van der Vaart as the better bet in a creative midfield role, which would see €9 million-a-year Kaka sidelined to the bench.

It is believed that the prospect of the highly-paid Brazilian international being only a bit-part player next season cannot be considered by Real management and they’re now prepared to sell.

Only on Sunday, Chelsea boss Carlo Ancelotti admitted he would love to bring Kaka to London, though wasn’t sure if Real were prepared to sell.

The big stumbling block to any deal will be Kaka’s fitness. Should the midfielder choose to undergo more groin surgery, it will leave him out of action for another three months – making any big money move away unlikely.