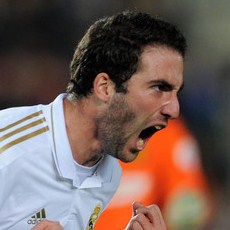 It has been revealed that Chelsea are waiting for news from Real Madrid over Gonzalo Higuain’s situation.

AS reported that the Spanish giants are now preparing to sell the Argentina international at the end of the season – so long as they can find a quality replacement.

Chelsea boss Andre Villas-Boas is a big fan of Higuain and made enquiries during last month’s market.

Juventus are also interested, though sources say their signing of AS Roma striker Marco Borriello has seen plans for Higuain put on the back burner.