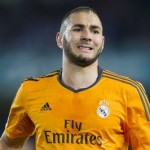 Reports are out claiming that Real Madrid have told Arsenal they can sign striker Karim Benzema.

The Mail on Sunday reported that the Spanish giants are ready to test Arsenal’s resolve to sign striker Benzema by asking for a fee of £40 million.

Despite the club’s wealth they need to accumulate funds by selling at least two star players to help fund a bid for Liverpool ace Luis Suarez.