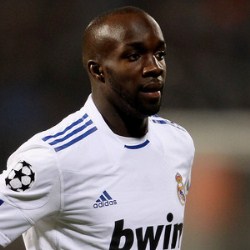 Reports have surfaced that Real Madrid are eager to sell Lassana Diarra.

AS has reported that the Spanish giants want to sell France midfielder Diarra within the next five days.

On his part, it is said that Diarra wants a return to England and favours Manchester United.

The former Chelsea, Portsmouth and Arsenal star has also been linked with Tottenham.