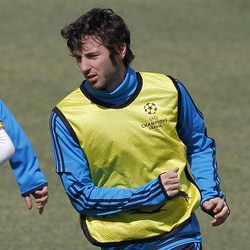 Reports are out claiming that Real Madrid have rejected an offer from an unnamed Premier League club for Esteban Granero.

The 25 year old Spanish midfielder has a year to run on his current deal and only a bit-part player at Real – but his presence is valued highly by coach Jose Mourinho.

According to Marca, the Spanish giants have turned down the English offer, with West Ham United and Everton among clubs linked.