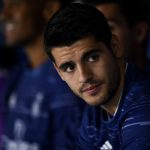 Reports are out claiming that Real Madrid striker Alvaro Morata admits Chelsea pushed hard to sign him over the summer.

Morata was a target for Chelsea after Real Madrid had bought him back from Juventus, Antonio Conte having been their Coach at the time of the striker’s arrival in Turin

“Chelsea showed the most interest in signing me,” he told BILD.

“They offered roughly €70m, but Real Madrid said they had me in their plans and that was always my dream.”

Jose Mourinho Has No Plans Of Selling Kaka In January