Real Madrid chief Emilio Butragueno has declared that Mateo Kovacic may not be their last summer signing. 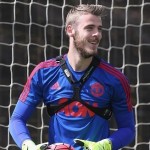 Kovacic was presented to local media and fans today.

Butragueno said “we have an outstanding squad right now”, although he refused to rule out further signings, “the transfer window is open until 31st August”.

Butragueño would neither confirm nor deny any reports on Manchester United’s Spanish keeper David de Gea. He also refused to comment on Marco Asensio’s immediate future at the club, other than to confirm “there will be some news soon”.