It has been revealed that Real Madrid have secured first option with Borussia Dortmund for three of their stars. 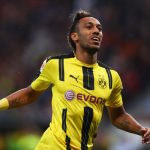 Marca claims that the agreement reached between the sides means that Borussia Dortmund will not allow one of their major stars to move to another side without first informing Real Madrid of another club’s interest in their players, specifically Pierre-Emerick Aubameyang, Julian Weigl and Ousmane Dembele, who are of particular interest to Los Blancos.

The friendship that exists between Florentino Perez and Reinhard Rauball is a key contributor to this agreement, which has been in evidence in previous summer transfer windows.

For example, last summer, Borussia Dortmund informed Real’s hierarchy that Manchester City were very keen on bringing Ilkay Gundogan to the Etihad Stadium, having been aware that the Spanish side had been interested in the midfielder in the past.

After Real Madrid informed the Westfalenstadion club that they had no intention of tabling an offer of their own for the Germany international, he made the move to Pep Guardiola’s side. Real Madrid Locked In Talks With Porto For Danilo