It has been reported that Chelsea star Eden Hazard is viewed by Real Madrid as Cristiano Ronaldo’s successor. 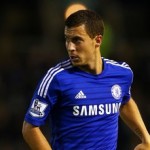 The Daily Star claims that the future of Portugal star Ronaldo has been up in the air recently, with reports circulating that the ex-Manchester United man may quit the Champions League winners at the end of the season after falling out with club executives.

That has led to Real drafting up a shortlist of potential replacements, with the unsubstantiated claims today suggesting that Chelsea star Hazard is Madrid’s No.1 target.

Any move is currently unlikely, but Real’s interest could develop if Ronaldo decides to force through a departure next summer.